In 2015 and 2016, I spent time in a distinctly beautiful region of Alaska: Northwest.

Geographically, Northwest villages are pretty flat, especially when compared to the portions of Alaska that boast staggering elevation and rugged terrain. There are mountains in Northwest, but they’re few. Some swaths are desolate and vast and mostly made up of permanently frozen ground, permafrost.

The coast is breathtaking. Craggy shorelines for days, and to the north, massive slabs of ice float across the Chuckchi Sea. The storms can be insane, with few topographical barriers to protect against raging wind and crushing snow.

Each village I visited in Northwest was different. But sadly, there was a pervasively depressing cultural commonality. There’s a dark side to this state. A side that is tough to discuss. But it must be said.

As of September 2016, I’ve worked in over a dozen Alaskan villages. In each one, there was a haunting similarity. Women are rarely outside, and when they are, they don’t tend to wave. Or make eye contact or look up from their path. I’ve seen women and girls with blackened eyes, broken noses, and profoundly hopeless gazes.

There’s something deeper than sadness in rural Alaska. It is the worst misery. It is lamentation personified. Born of violence and brutality, it is wrong and evil.

I noticed this painful truth acutely on a trip to Shungnak (pop: 262). On the flight in, I peered out the tiny window of the little plane. Dozens of people gathered on that summer day and it took me by surprise. As a newbie to Alaska’s villages, I hadn’t comprehended how vital bush pilots and their cargo are to daily life. The crowd was there to unload and load the plane on the runway – it was their first milk run in a week.

Mail, food, and mechanical parts were all unloaded. And these tasks were attacked with the speed and efficiency that only comes from regular practice.

As the throng went about their dance, I stepped away to take in the madness. Everyone seemed to know one another, making me feel like an outsider. Although it was a joyous congregation, I quickly realized it was all men.

I didn’t know these stats about my new home when I moved here. This infographic sums it up – but to put it bluntly, Alaska’s sexual violence rates are the worst in America.

There are a lot of serious issues in rural Alaska, but this is the worst in my eyes. Alaska ranked third on the list of violent crimes in 2013, but has consistently had the highest forcible rape rate in America for years.

Maybe this has to do with a lack of law enforcement – though others have indicated that it may stem from a culture of acceptance. I’ve heard this stated by prosecutors and public defenders alike. An Assistant District Attorney once confirmed the notion: “no jury will convict a rapist, even with a mountain of evidence.” She vented about this frustration with professional fervor. Ultimately, she said, “[it’s] a free-for-all out there. And women always pay the highest price.”

In 2012, the New York Times released a brutal story on the lack of justice in villages. The facts it presents are daunting: Native Alaskans make up 61% of the state’s sexual assault victims, despite comprising only 15% of Alaska’s population.

I connected with a singular and outgoing native woman working in the village of Savoonga (pop: 671), located on an island in the northern Bering Sea where you can literally see the Russian mainland – on a clear day. After we’d chatted a bit, I summoned some courage and gently inquired about a public safety poster. It discussed how to stop cycles of violence.

“It happens to everyone,” she said with a sigh. “It’s horrible, but that’s life. I had to deal with it. My mom dealt with it. My daughters will too.” We started talking about educational funding after that (another issue that plagues Alaska). I was glad she changed the subject, but was grateful for her honesty.

In another village, Brevig Mission (pop 388), I was walking on the beach and encountered a woman with a small flock of children in tow.

The kids were great and had no fear. They stopped their play as soon as they saw me and so began a barrage of questions. It was adorable.

“Excuse me, is your hair ok?” (My hair is red, mostly foreign in Alaska’s villages).

“Where are you from? Is it far away?”

In fact, I had not seen the seal and asked where it was. They pointed nearby. It wasn’t a living seal. Nope, this creature was long dead and had been riddled with holes.

It unnerved me that these young children would point out something so grisly. But their young attention spans quickly waned and they wandered up the beach playing tag. The elderly woman started to walk away when I asked if things like the seal were common. She shrugged (a standard response I’d received in many villages, so I took no offense).

I did the same and assumed she wasn’t interested in a conversation. So I packed up my camera and turned back toward town.

But then she spoke, in a slow deliberate voice: “Lots of sad people here. They get angry. And then this.” She pointed at the seal with an abrupt lift of her chin. I looked down, trying to think of anything to say. My eyes fell on a colorful starfish as she continued.

“Women get hurt by men. And the family men get angry. But it doesn’t stop. So they break things. Or hurt animals.” Her words made me realize that men in these communities are affected by such tragedies too, albeit differently. I thought about how I’d feel if it were my sister were in that position.

The woman even mentioned how many assaults go unreported. “It only brings trouble,” she said. “Law can’t do anything, and it makes bad men angrier.” It’s a reasonable conclusion – but it flies in the face of every notion of justice and made me sick to my stomach.

She extrapolated beyond that as her charges laughed and shrieked along the beach, talking about how vandalism and graffiti were common – outlets for angst and unresolved sorrow.

It explained why public buildings constantly got rocks thrown through windows. Why surfaces had spiteful spray-painted messages across their breadth.

These words and images are everywhere and seemed like creative methods of saying, “this is not OK.” In the moment, it probably even feels good. It makes sense in a strange way: they’re harming the establishment that led to the status quo. Sticking it to the man, as it were.

Yet, it doesn’t solve the problems.

Perhaps to some, it’s a form of grief. 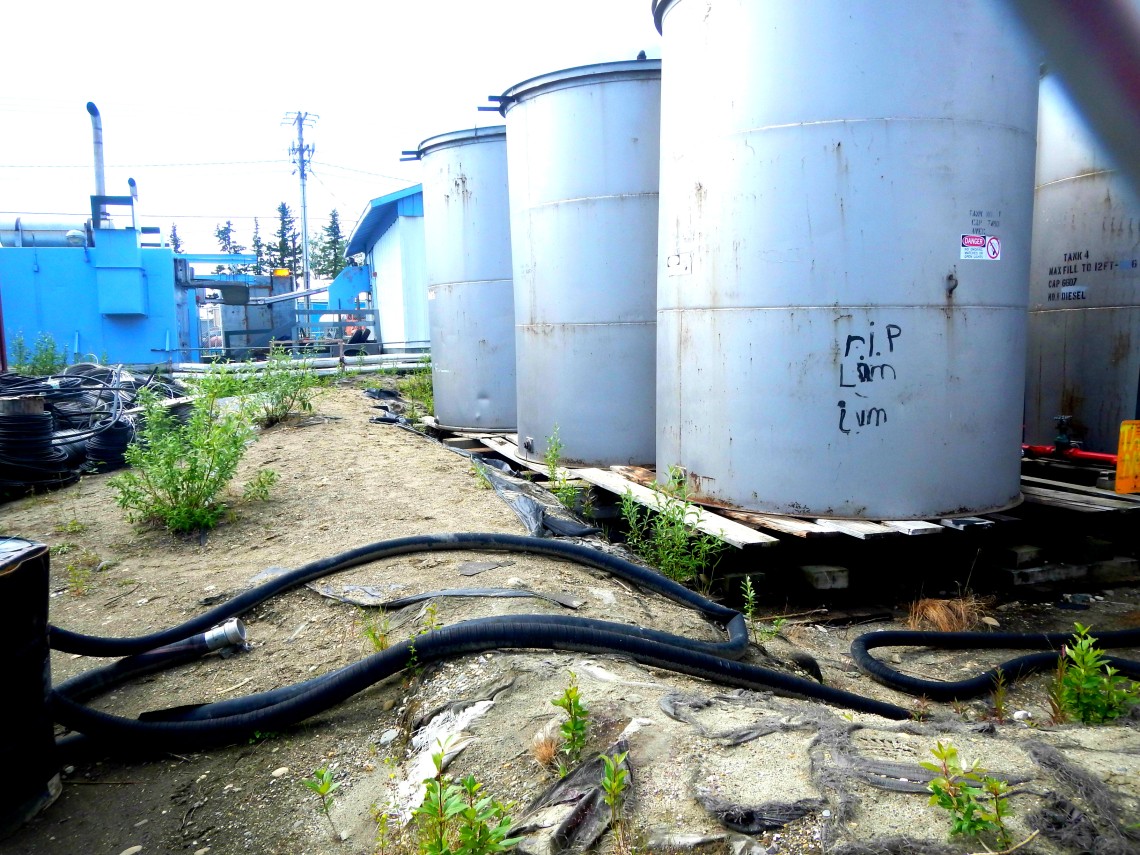 The old woman and I parted awkwardly. I had no idea what to say to these terrible truths. I understood her misery and could do nothing except convey compassion. She shuffled onward as I wished her well.

The children saved my spirits a little as they shouted their goodbyes. One little dude even ran up to me to snag a high-five. Kids kill me sometimes, they really do.

I’ll end this post with a glimmer of hope: this issue has become a national and statewide conversation. And it might be a start. The 2015 Alaska Victimization Survey shows things have improved since 2010.

Data can be skewed, but we can only improve the situation by spreading awareness and discussing these serious problems. Let’s keep the conversation going.