My first full day in Nightmute was great, if a little slow. The morning was cold cold cold (about 2 degress Fahrenheit) and dark dark dark. But brilliant stars dotted the sky, and warm food plus hot beverages were on-hand to quickly warm us up. 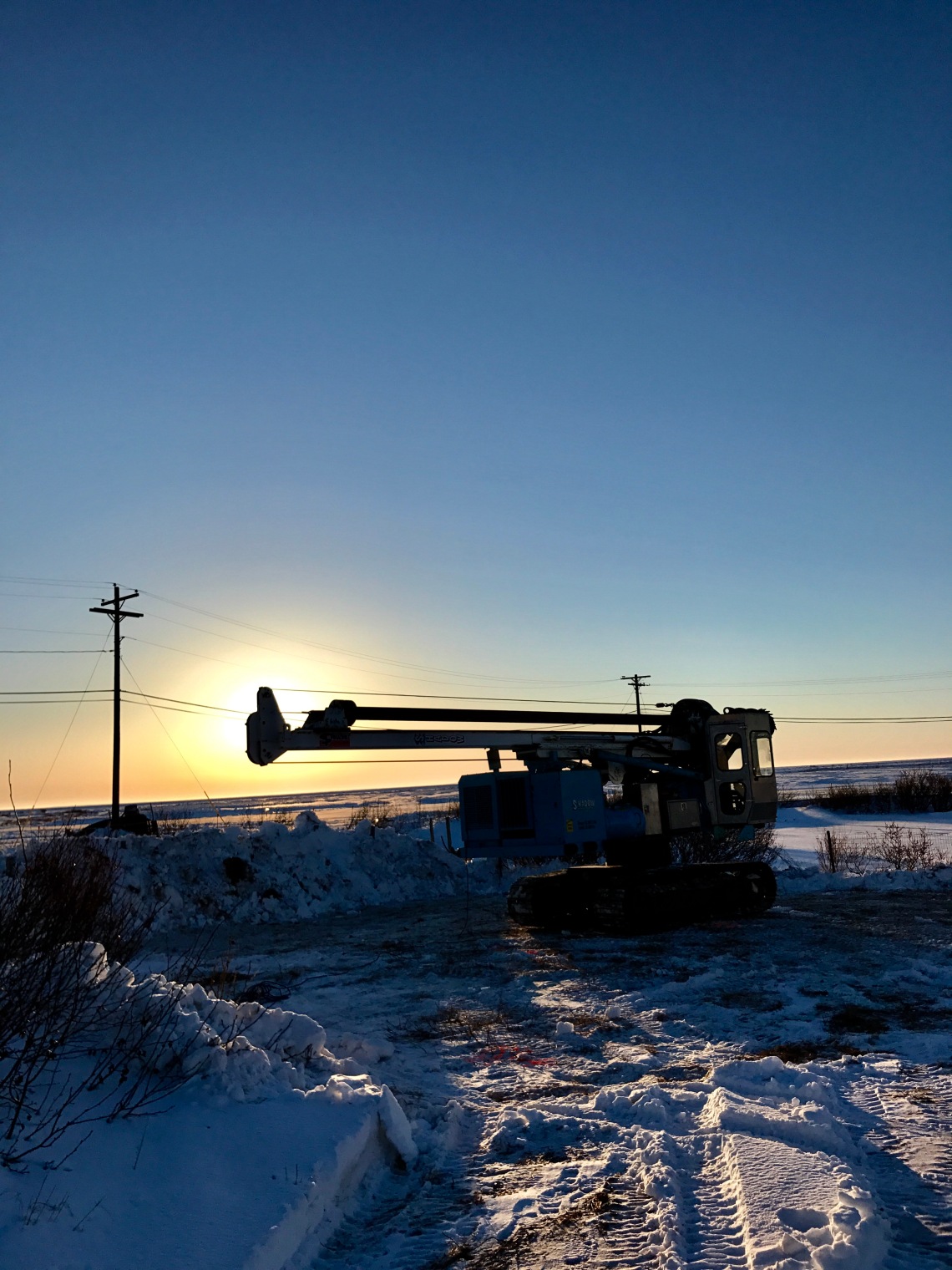 The crew working on the new school is a jovial bunch, yet super hard working and incredibly skilled. We chatted about today’s objectives over breakfast before everyone broke off to tackle their respective tasks.

Shortly thereafter, I met the principal of Nightmute’s school. A friendly gentleman, he’s lived all over Alaska and I had a great time hearing about different places and things he’s seen. But the most intriguing part of the conversation got to the root of Alaska’s rural woes. Please allow me to wax about Alaska’s village schools before returning to the conversation with Nightmute’s principal. 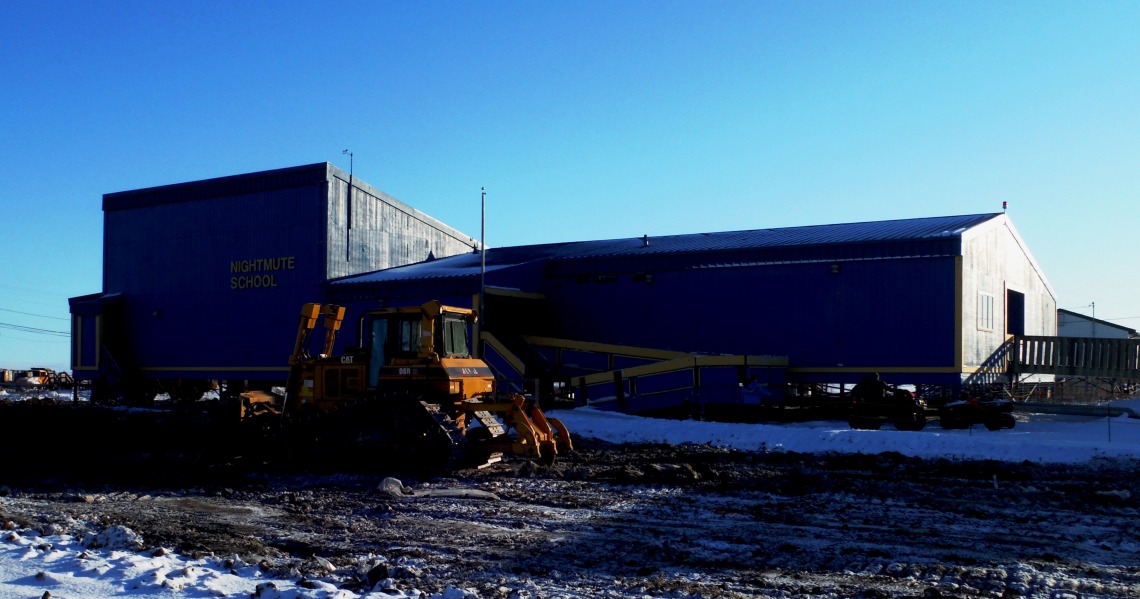 I’ve heard it said that if rural education were better, Alaskan villages wouldn’t have quite so many problems. I’m inclined to agree.

The Great Land (as Alaska is known) has a host of severe issues, especially in village communities that are way out beyond any road system. This state’s remote areas have some of the worst per capita rates of domestic violence, rape, assault, substance abuse, murder, and suicide. (I discuss some of these in previous posts, so won’t belabor the point here). But what’s at the heart of it all? Is there a common thread? I’d argue that yes, there is: education.

It stands to reason that where an education system fails, so too do those generations caught in its sway. Obviously, not all individuals fall prey to broken schools, but many do. Schools invoke knowledge about science, history, and literature, oh yes. But what about invaluable life lessons on emotional intelligence, communication, sexual education, etc.? It seems that a struggling school on the fringes of the world can only hope to convey so much with so little. 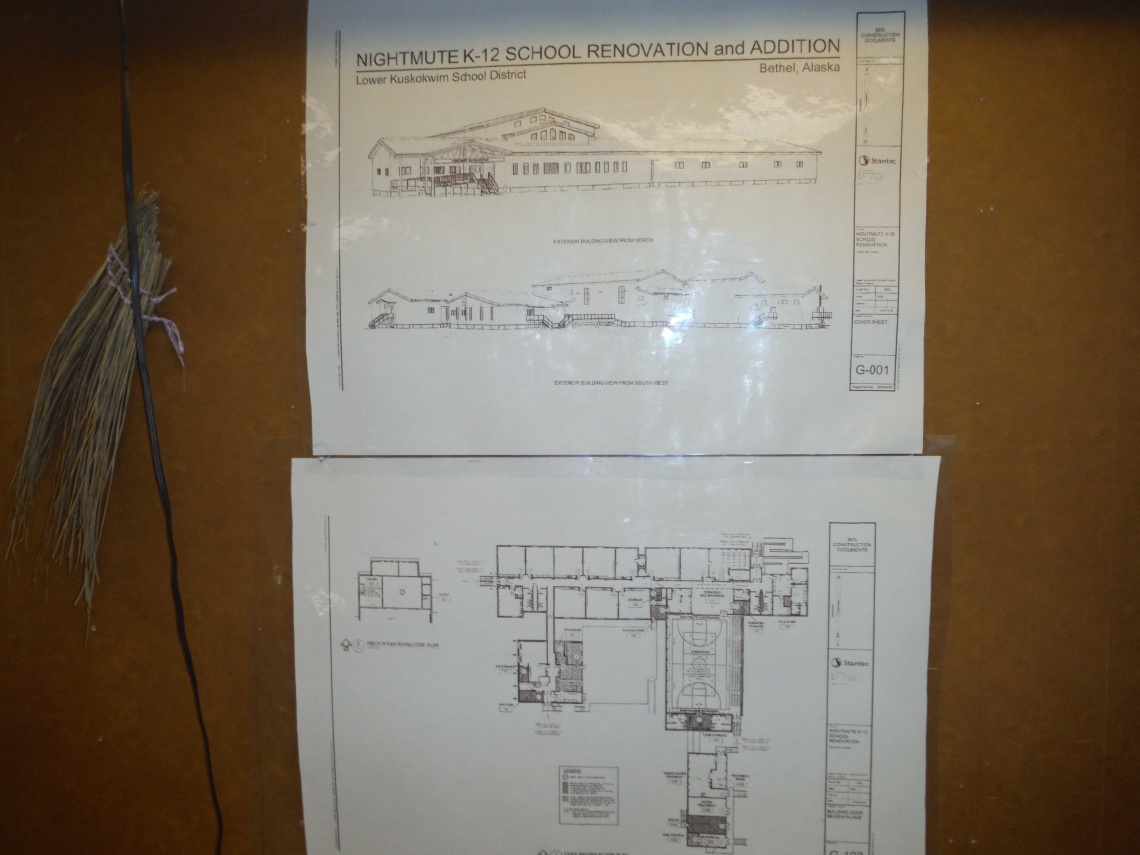 The same can be seen among poorly performing urban schools. Underfunded and lacking quality educators, the schools that serve those below the poverty line are synonymous with failing education:

As one education center reported: “16 to 24-years-old students who come from low income families are seven times more likely to drop out than those from families with higher incomes.” (National Center for Education Statistics, 2014). Though this statistic begs the old “chicken or the egg” conundrum: do impoverished children fail at school or do schools fail impoverished children?

In Alaska, I believe it’s similar, but worse. For one thing, rural schools have an extraordinarily difficult time recruiting teachers. Turnover rates are shockingly high and the educators they get are largely inexperienced or unequipped to handle the devastating environments in which they find themselves. Which is to say nothing of the unique hazards that their students face.

For example, Native schools have “the highest percentage of all groups to report injury with weapons and fights on school grounds.” (National Education Association, 2015). Another critical challenge is creating a lesson plan that’s relevant and/or interesting to rural Alaskan children. When you grow up aspiring to be a commercial fisherman or whaling boat captain, why pursue a college education or even high school diploma?

In order to receive federal funding, schools must maintain a regulated curriculum. That’s all well and good (there need to be standards for such important fiscal allocations, right?). But are the preordained educational programs that well-suited for a majority of these village students?

Flash back to my conversation with the principal on the particular challenges his school faces. First, resources are scarce. There are few means to repair his buildings and keep kids supplied with necessary resources. Books, computers, pencils, flashcards, it’s all cost-prohibitive and he’s already operating on a shoestring budget that looks to be shrinking. Plus, supplies take ages to reach Nightmute.

While Alaska does spend a huge amount on education per student (and to a lesser extent, so does the United States government), there’s so much more to the picture than mere dollars and cents.

Further, human capital is lacking as well. Aside from the aforementioned recruitment issues, there aren’t replacement or substitute teachers just hanging around or waiting on-call to fill in when needed.

Last weekend, four teachers went to Bethel for training. These sessions are typical and a great way to invigorate educators. But, as is sometimes the case, all went haywire when harsh weather left the teachers stranded in Bethel for nearly five extra days. This halt on air traffic put a halt on all transport of food, supplies, and mail.

For the school, the five day absence threw a wrench in everything from the principal’s schedule (since he had to play substitute to four classrooms worth of antsy children) to the school calendar, which had to be pushed back a full week due to delayed lesson plans. Those were also five days worth of meals and motel rooms that came out of the school’s budget.

Nightmute’s principal said all this optimistically. He seemed genuinely intrigued by the challenges that remote communities present – he must be since he’s dedicated his life to it – but my mind kept coming back to the fact that these schools need MORE funding, not less.

The rest of the day was enjoyable. I got to take a walk in the morning and then enjoyed a run out to the airstrip in the evening. The roving packs of village dogs were in full force today, one little fellow was a distinct joy to have around. He acted as my four-legged tour guide. Not sure what his actual name is, but I dubbed him Wiley. 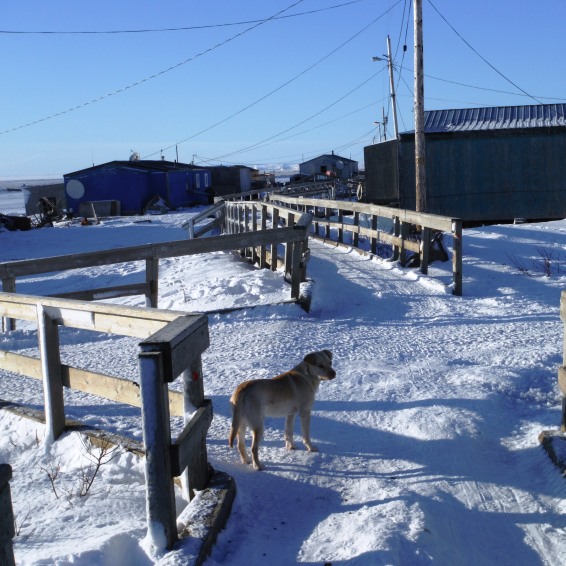 Just look at that little mug. Wiley led me around town, stopping to smell the occasional splotch of bloody snow or introduce me to his canine kindred. It was a hoot. He was quite keen on these hanging muskox pelts, which were massive and made me grateful for the cold air cause it kept the smell down(ish).

Dinner was amazing – no muskox yet (the meat is still being prepped) – but we did enjoy some moose stew that the next-door neighbor gave the crew last week. The meat was tender and tasted great with an assortment of veggies and a side of mashed potatoes.

And with that tasty thought to conclude things, I’ll pick up the tale tomorrow…