Warning: this post is mostly photographic and contains graphic images of bloody bones and guts and such.

My colleague and I got to go to Wainwright, Alaska in early August, 2016. It was incredible. Expansive tundra, good people, military history, and surreal beauty everywhere. 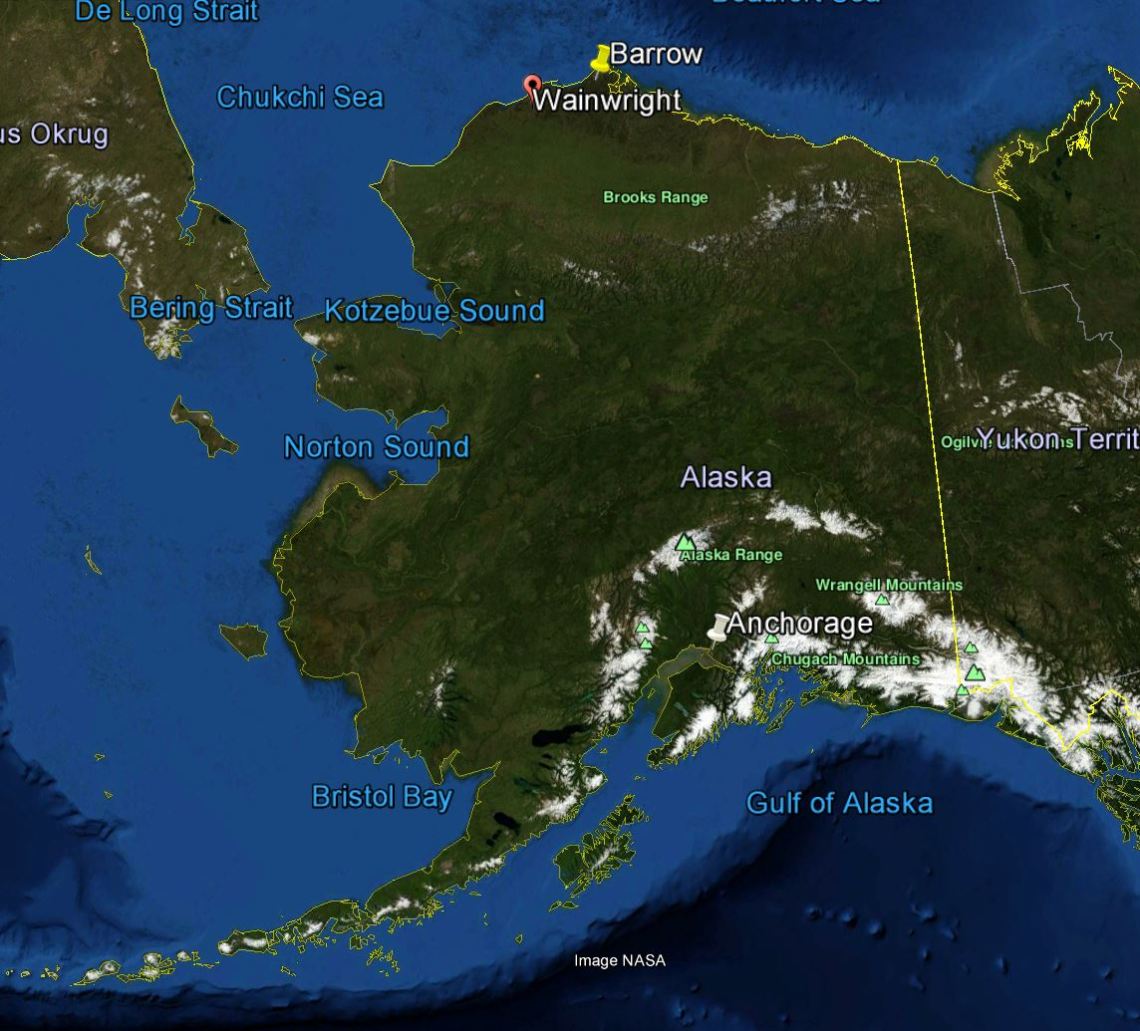 Wainwright, with a population of ~550, is at the top of the world on the Chuckchi Sea about ~70 miles west of Barrow. The town itself rests between the ocean and an inlet that’s sorta lagoon-ish.

We arrived on a crisp afternoon. The atmosphere was hazy with occasional sharp shocks of blue skies and sunlight poking through the cloud cover. The air tasted moist, salty, and constantly danced with inexhaustible strength.

There’s no shortage of neat stuff to see on the beach. Mostly dead stuff. It was a nice reminder of life’s impermanence. If you ever get a chance to take a four wheeler along the sandy beach (pictured above) or the gravel and shale shores of the inlet (below), do so! 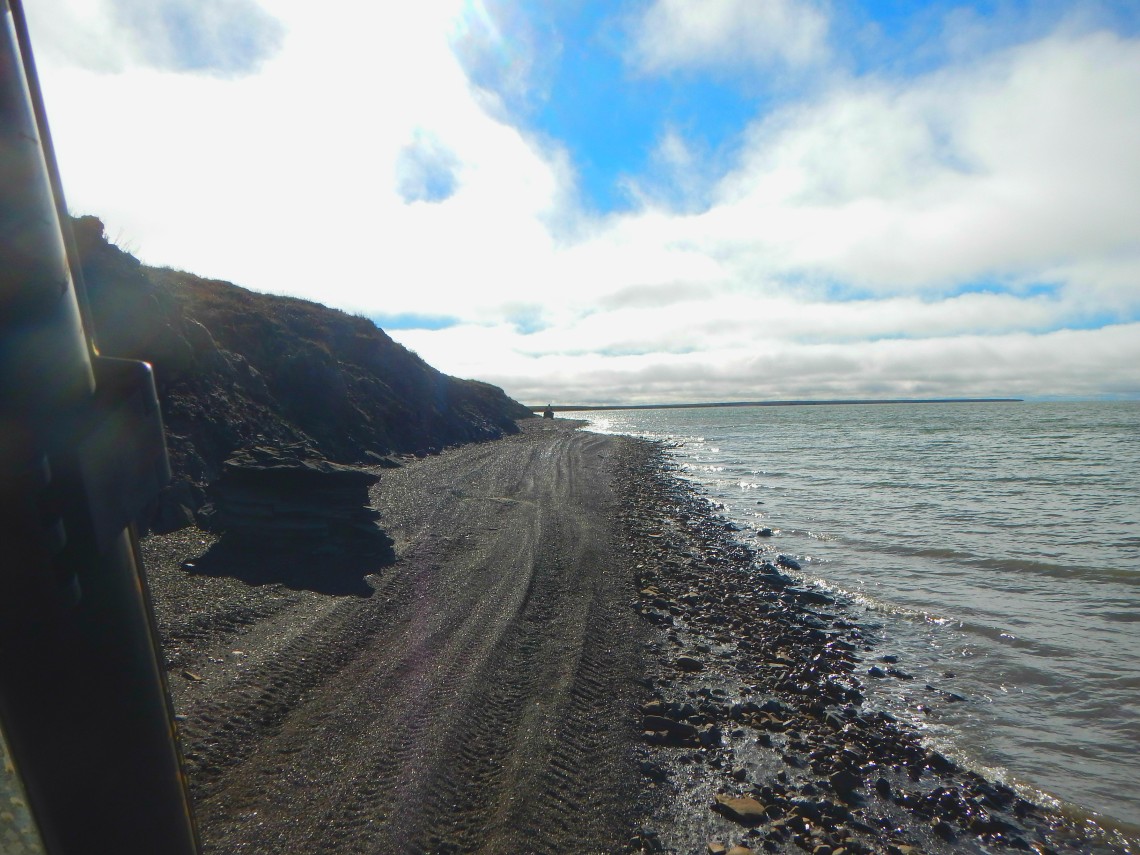 You’ll definitely find some colorful geology, and possibly a washed up denizen of the deep blue abyss.

Walking along the beach, you can see plenty of marine mammal remnants. This beluga skull had to be pointed out to me, it looked like another piece of driftwood at first. 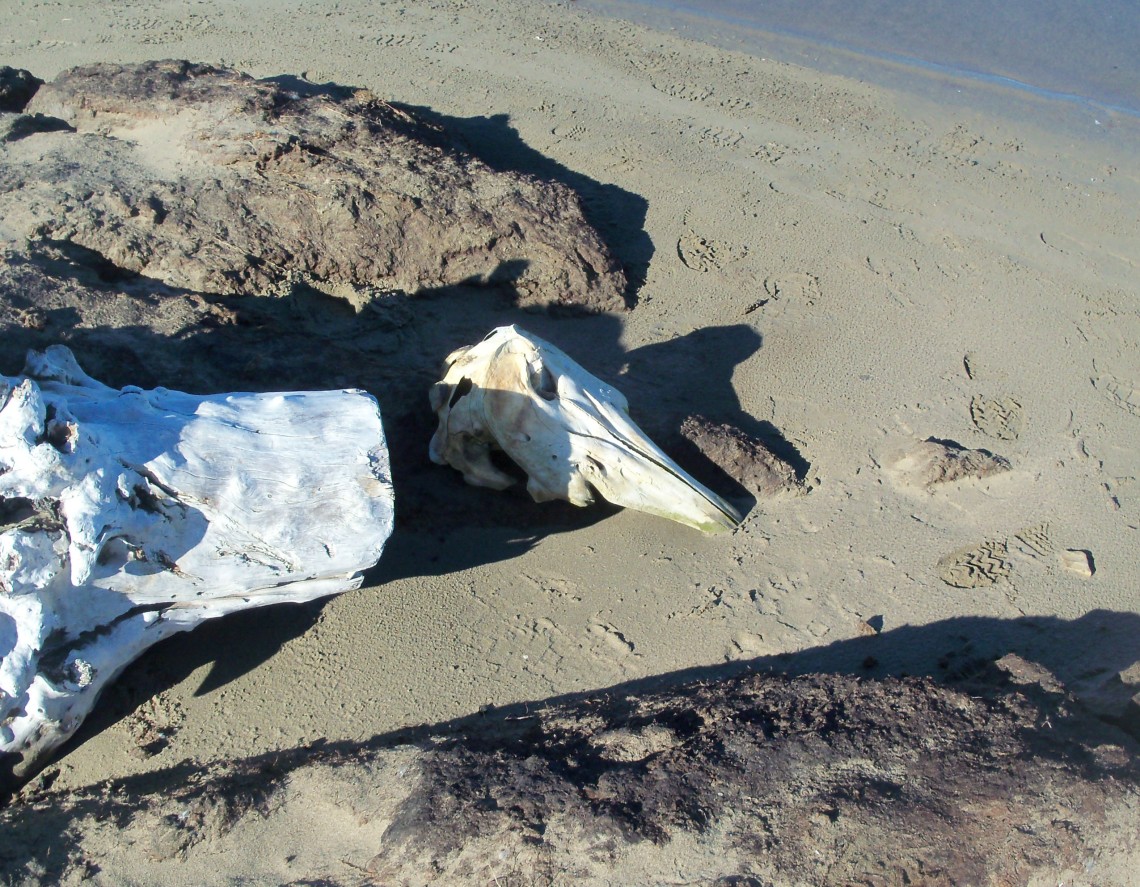 Sadly, foxes can be rabid up that way, so this unfortunate critter met an early end while foraging on the beach.

Walking around town was a treat. Brightly colored houses and structures are adorned with anything from antlers to political posters.

We enjoyed a bit of comic relief one morning. I had never seen a truck moved in such epic fashion. Who needs a tow truck when you have a massive Volvo with a forklift extension!

Old bits of boat acted as reflective reminders of the town’s long history of whaling, fishing, and oceanic trade. 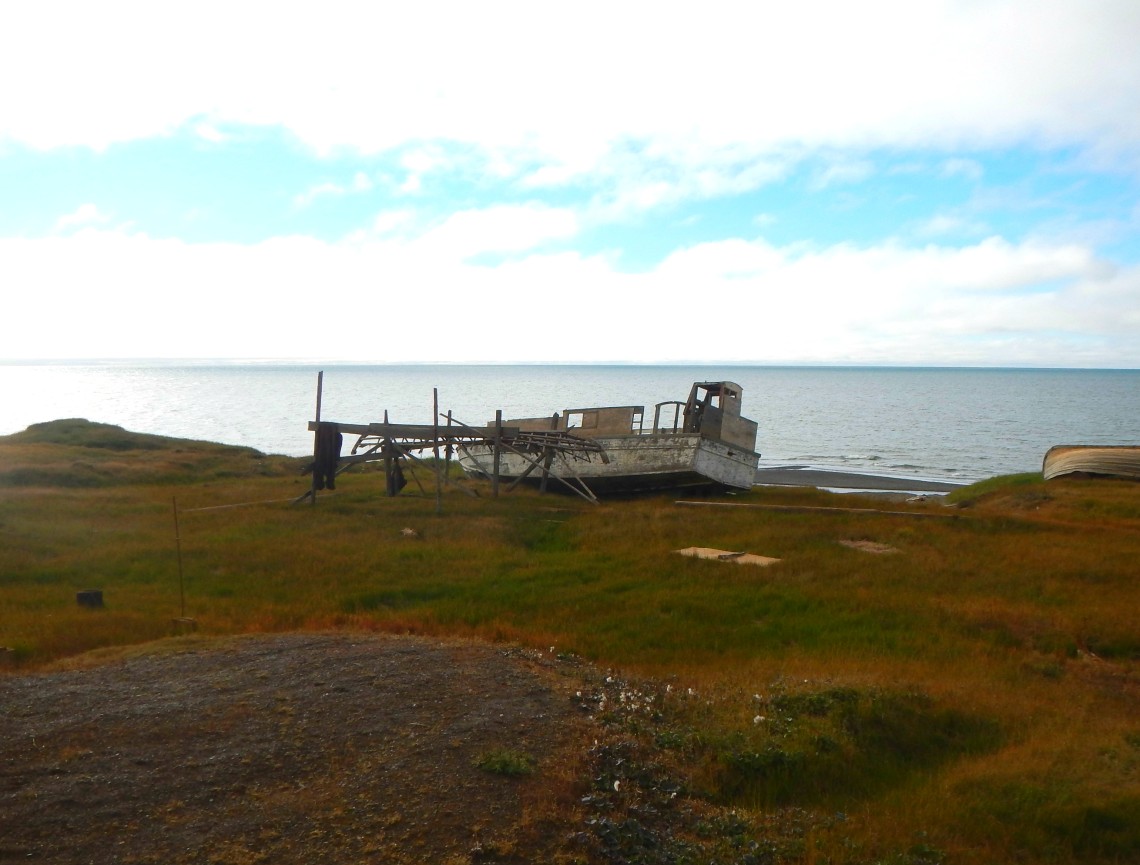 Wandering around town yielded myriad unexpected delights, like this random caribou leg in the middle of the road.

Just east of Wainwright along the inlet, the United States Military built a huge radar facility as part of the Distant Early Warning (DEW) Line of the Cold War. The DEW Line was operational from 1957-1985, though the Wainwright installation was maintained until 2007.

One of the principle reasons the United States Government stopped maintaining the DEW site was due to erosion and increased costs. This struck me as an odd acknowledgement of the Arctic’s climate change issues, and ultimately ended up increasing interest from a multitude of outside organizations. While their activity in the area is well intentioned, the involvement of environmental organizations and nonprofits is not without controversy.

The main structure of the DEW site houses a gigantic orb at the top that looks like a soccer ball up close. It’s HUGE and ominous as you approach.

We had the opportunity to go inside and climbed the tower up to the radar sphere itself.

The site may be shut down, but the cameras and signage still exude a presence of authority. As we marched up the dark stairs and ladder leading into the radar soccer ball, I heard weird echoes coming from the dome. 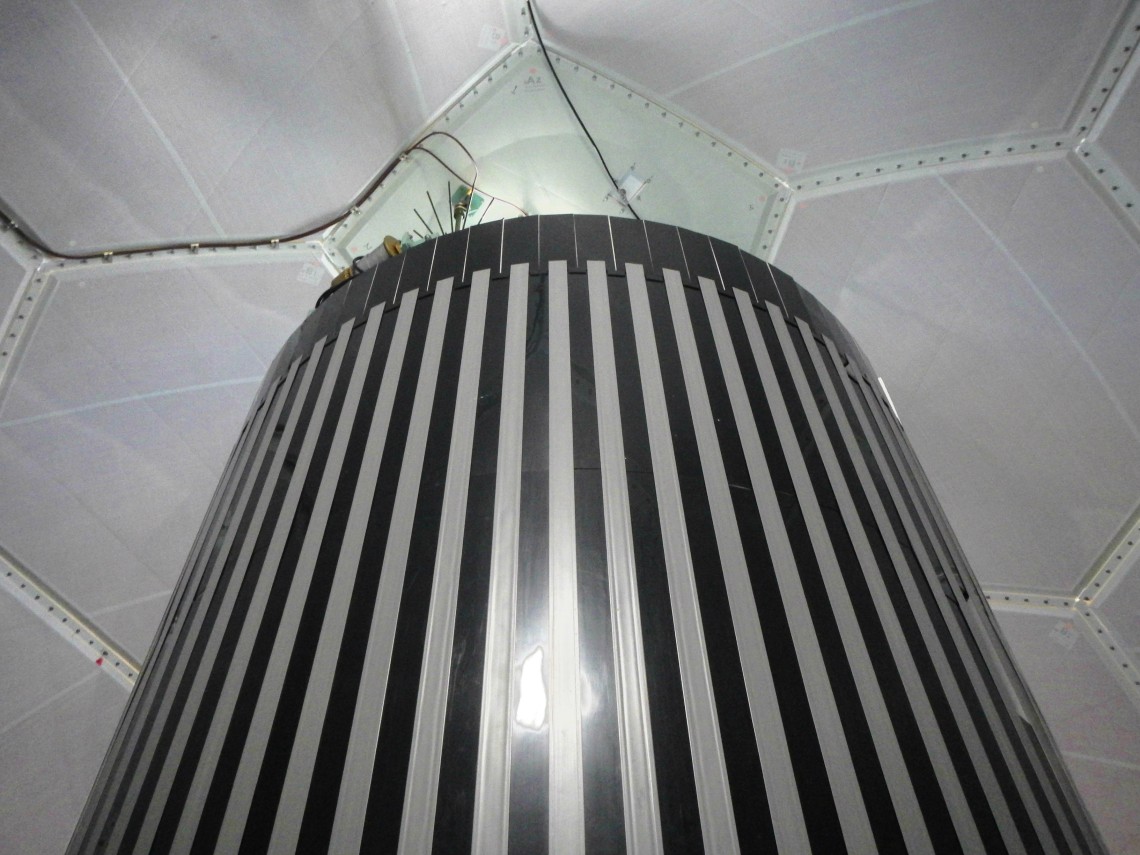 Being inside the radar was unnerving – the hard surfaces and perfect geometric construction made every noise bounce and reverberate. Humming, singing, and whistling were especially eerie.

Despite the decreased radar coverage in the north, there has been a renewed call for more icebreakers to augment the Coast Guard’s presence in the Arctic. As Russian and Chinese investments in exploring polar passageways increase, it seems the US has fallen behind, causing one to question whether the next pioneers in Arctic trade will be adequately protected.

Back outside, strange collections of bones dotted the tundra, sometimes standing straight up out of the ground… 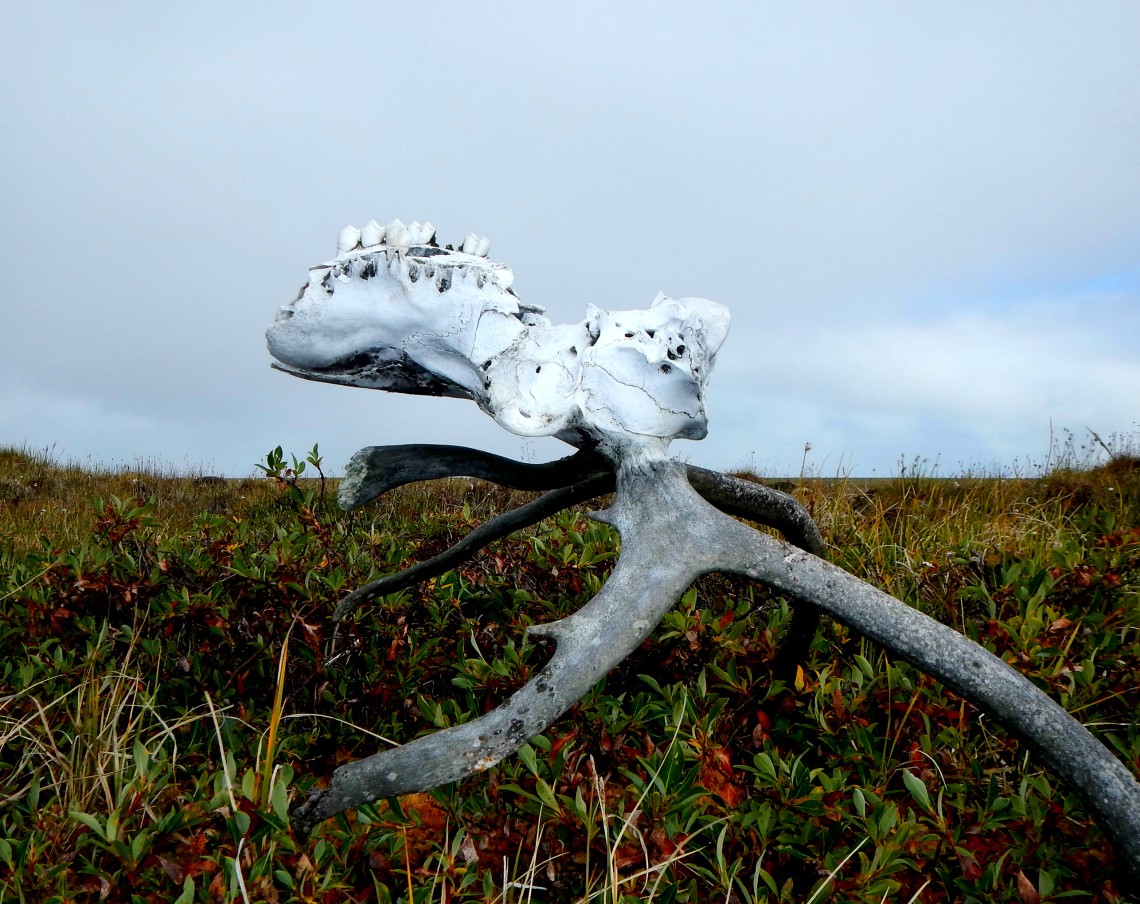 On our final morning, we went south of town along the beach to check out a giant collection of whale and walrus bones.

While the skeletons were amazing to behold, the smell was fierce and rank. I could still taste the decomposing fishy stench in my nostrils a day later.

As we took in the extent of the remains, it was clear that Wainwright’s hunters are skilled at their craft. With the astounding number of kills, it’s no wonder a polar bear unwisely scoped things out last season.

We retreated from the smelly mess of whale bits and went to the air strip to await this delightfully bouncy Grand Caravan, our chariot to Barrow on a clear crisp August day.

One of the greatest things I saw on this trip transpired on the tarmac, as perhaps a dozen villagers descended on the plane to unload its cargo. There were smiles, greetings, and packages got tossed from the aircraft to eager recipients and awaiting trucks.

During our final moments on the ground, I witnessed this gentleman hugging his family before slowly making his way across the tarmac to board the plane.

The sunlight hit the water and twinkled a glistening goodbye. Wainwright rocks and I cannot wait to return. 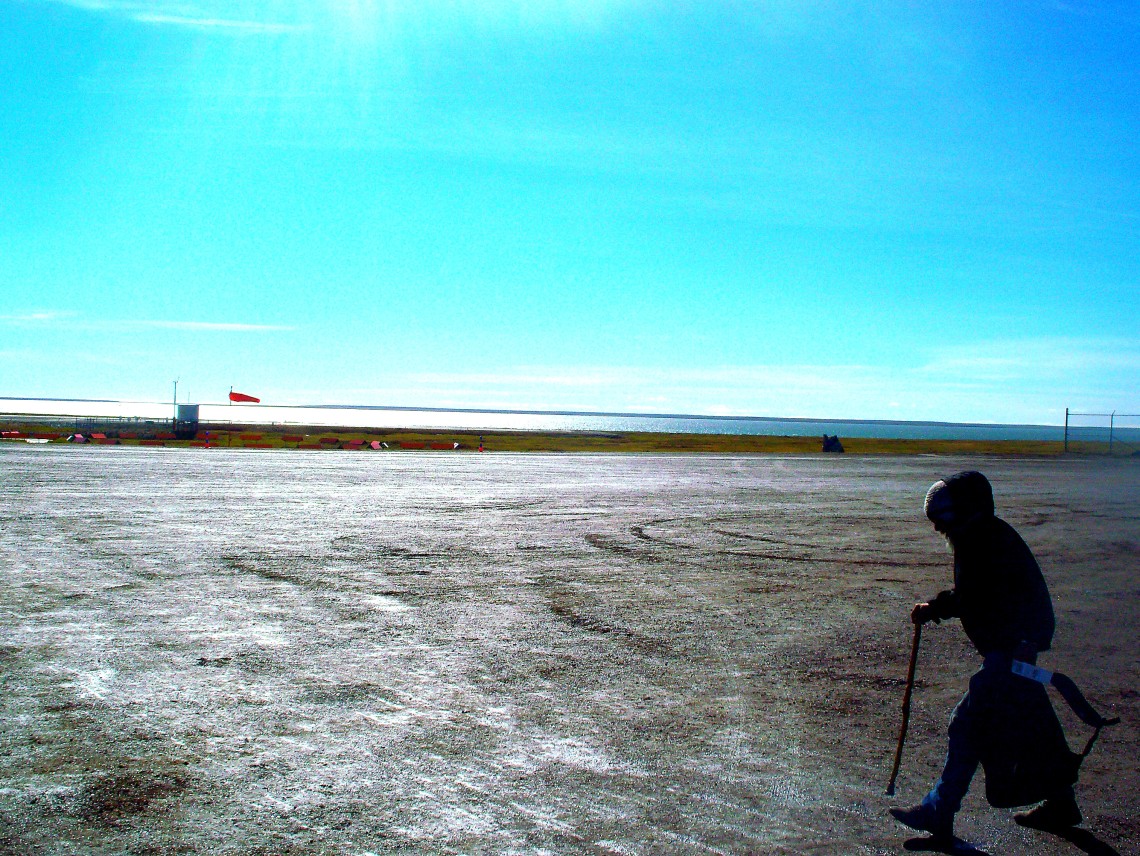