This post is dedicated to the memory of Gabriele Cianetti, may he rest in peace.

An airplane departed Port Heiden’s runway yesterday, May 1, 2017, at around 13:00. I was out for a jog as the aircraft took off, looped over the village, and turned its nose southeast toward Perryville. The gray day spat spurts of rain intermittently as I ran. I’d gone out to the gravel pit south of town and was halfway home when I heard a propeller approach overhead.

I looked up, saw the plane, and wondered several things in short succession. First, who flew the Grant Aviation aircraft? Were any Port Heiden residents on board? And could the pilot (whoever it was) see my massive farewell wave from the air? It flew right over me as I craned my neck back and then spun around to run backward so I could watch it grow small in the distance.

Hours later, I learned that the plane crashed not long after I waved goodbye. Two of my three questions were answered in short order. The pilot was a fellow I knew named Gabe and no one from Port Heiden was aboard. The third answer remains unknown. I hate to think that my wave was the last human contact Gabe had before he crashed, but that is a mystery that will likely never be revealed.

My final conversation with Gabe took place six days prior. It was amazing and revealed a deeply passionate man committed to enjoying Alaska’s skies.

I’ve written in past posts on the perils of flying in Alaska. In 2016, there were an unfortunate 90 crashes in the state, resulting in 32 deaths. This most recent incident marks the 16th crash in 2017, with two deaths as of May 2. Port Heiden, however, has had some uniquely scary brushes with these disasters.

As January 2017 came to a close, I ended a family visit in Los Angeles. Wending my way through LAX toward the Anchorage-bound gate, I did multiple double-takes when I thought I saw a new acquaintance from Port Heiden.

I couldn’t be sure it was who I thought it was, as tears had recently been shed on the somewhat familiar face. She noticed me though, and sure enough, two Alaskans randomly converged in the middle of one of the busiest airports in the world. But it was not to be a happy chance encounter.

The tears were quickly explained: Gerda (Port Heiden’s head Administrator whom I’d met in Anchorage back in December) had just been in a crash but the locator beacon on her aircraft wasn’t working and no one could find her. This is one of the worst case scenarios in mid-winter; a downed plane amidst the frozen tundra can be an almost impossible thing to find in time to help, especially late in the day with nightfall approaching.

But Port Heiden was lucky that day. Within minutes, a call came with some good news. Gerda was alive and had been found. Luckily, she’d managed to use her cell phone to send a text for help.  I’m still flabbergasted that she had service, particularly since her cell was quite busted. She later told me that her Apple iPhone was in sad shape after the crash, with a cracked shell and shattered screen, but the text message miraculously got through.

Rescue arrived shortly after, but it was a terrible day for Port Heiden, which came close to losing a visionary and pivotal leader. As it stands, Gerda and the pilot both suffered severe injuries, each requiring multiple complex surgeries.

The preliminary report and pilot confirmed that the craft iced up. It’s a testament to the pilot’s skill that they survived. All too often, such a feat isn’t possible.

It’s still too early to tell what happened to Gabe’s plane. We know that it was found around 3,000 feet up a mountain. Some speculate it was foggy and he didn’t see the elevated terrain creep up on him. The enigma is maddening and makes the reality of his death all the more tragic. Especially for his family and friends, since the body cannot yet be recovered due to the treacherous weather and terrain.

(Update: Gabe was recovered a week later once conditions improved).

Gabe flew me to and from Port Heiden three times. We flew in that very same crashed Cessna Caravan just last week. He’s flown so many people in and out of Port Heiden, some in the town are understandably shaken today.

The first time Gabe introduced himself back in March, the middle-aged pilot put out his hand a bit awkwardly, though his smile was genuine and charming. “Hi, I’m Gabe,” he stated with an accent that I thought was Eastern European at first, but took on Italian lilts as he asked where I was headed. “Port Heiden! Sono Chasen, mi fa piacere vederti!” I responded. He looked surprised and rattled off a high-speed question, most of which flew right over my head. He laughed when I apologized and admitted that we’d reached the extent of my Italian.

Standing at a somewhat gangly six feet tall, Gabe struck a peculiar dichotomy between goofy and intense. His rounded glasses gave him an owlish charm, while his eyes peered out inquisitively from a balding head with a slightly scruffy face and sharp features. I remember being impressed by his demeanor, respectful and curious, but clearly in charge.

I feel fortunate that I had the chance to connect with Gabe and share a meaningful moment before his passing.

The last time I flew with Gabe, we departed King Salmon for Port Heiden on April 25. It was a partly sunny day and low-hanging clouds were calmly rolling across the sky. “A great day to fly,” Gabe cheerfully commented as we walked across the tarmac to the awaiting Caravan.

Gabe was meticulous with his pre-flight checks, walking a full circle observantly around the plane’s exterior before entering the cabin. Once inside, he did a double-check of the cargo and my seat harness to ensure everything was secure. After talking me through the safety features of the plane, he duly confirmed that I understood, had no questions, and was comfortable before take-off.

Most pilots don’t go to such lengths. The act of walking fully around a plane before take-off is supposed to happen, but might not for the sake of timetables or laziness. And I’ve never had a pilot ask if I have any questions or can be made more comfortable. All these things distinguished Gabe as civil and thoughtful. I respected him.

A little ways into the flight, I noticed something out of my window. As we flew the plane over the fluffy cotton ball clouds, an anomaly of natural beauty appeared to follow us. Illuminated on well-placed masses of condensed water vapor was a circular rainbow of stunning vibrancy. 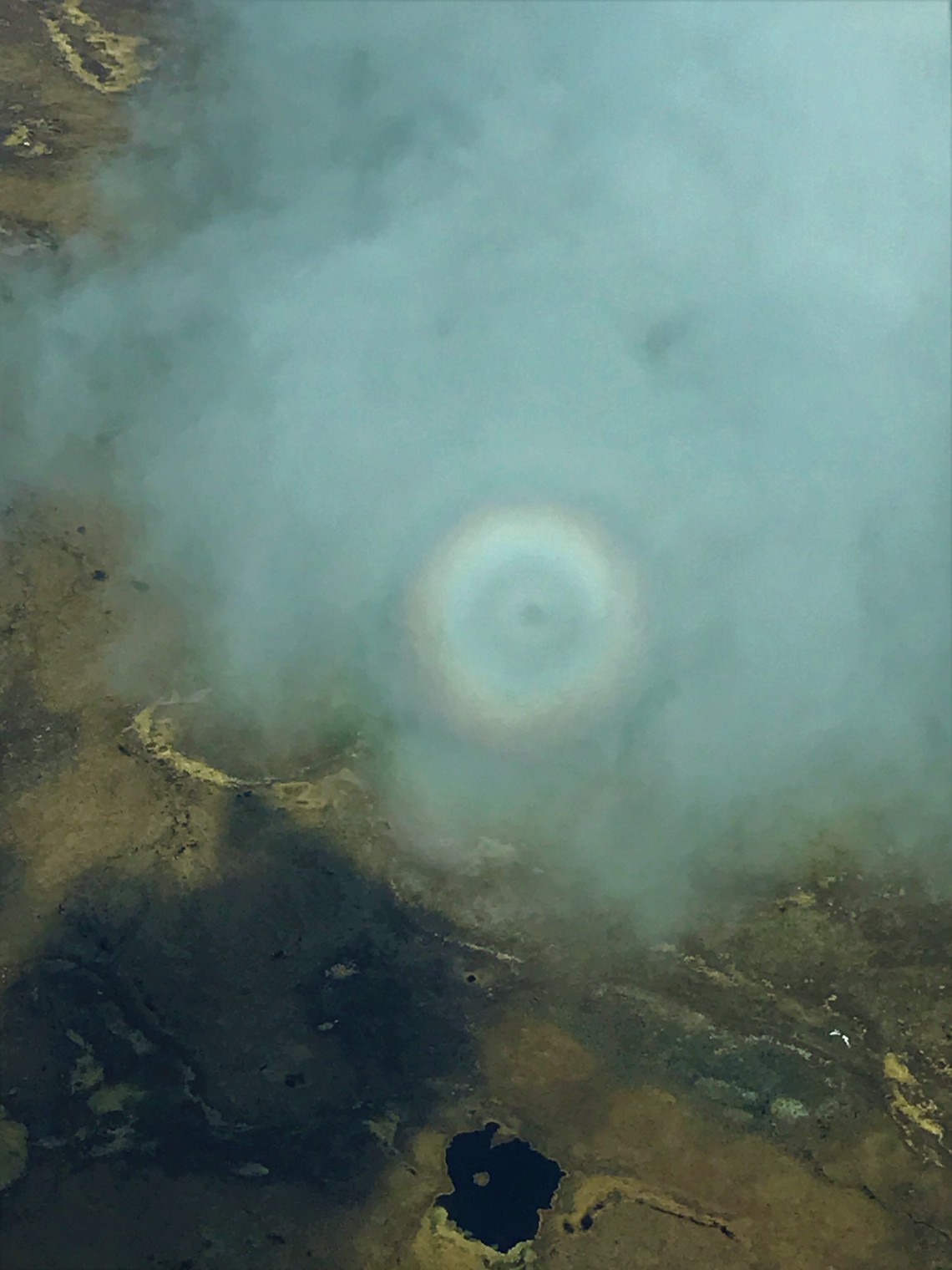 I was utterly awed. The rainbow seemed to dance, like an everlasting firework continuously fountaining in a circular explosion across the visible light spectrum. The pictures don’t do it justice. Each time I tried to take a decent photo, the colors just wouldn’t appear as they did to the naked eye.

I had to sit patiently during long stretches of cloudlessness, but the waits made each sighting that much more thrilling. The rainbow sometimes seemed small and far away, other times it leapt right up and illuminated the plane’s shadowy silhouette.

Not wanting to alarm or distract Gabe, I kept watching and trying (in vain) to get a good photo during the rest of the flight. Alas, while my phone wasn’t capable of capturing the sight, Gabe was ELATED for me once we’d landed and I’d told him what I’d seen.

“Glory!” He exclaimed. My quizzical expression must’ve explained my ignorance. (I figured maybe this was some new slang that hip pilots were using). But Gabe was ever gracious as he told me the phenomenon is called a “glory,” refracted light waves bouncing from the plane against water droplets in the air. As he explained all this, Gabe’s smile lit up his face with unbridled passion. It was clear that rare natural occurrences sparked Gabe’s interest and I was psyched to witness something so special.

Gabe had to dash back into the air briefly after he explained the glorious circular rainbow. But I was grateful to him for taking the time to share his enthusiasm for flight and knowledge of the high-altitude natural world.

In reflecting on Gabe’s passing, I started with my memories of him, which are plainly scarce. Then the newswire started trickling and I learned more about Gabe (thanks to the Italian news outlet, Nove da Firenze). As I read the article, translated helpfully from Italian to English by the Google machine, my respect for Gabe turned to admiration.

This was no run-of-the-mill pilot. Nope, not by a long shot. Gabe had been fascinated by flight and decided 15 years ago to pursue this passion. He left Italy, his family, and a career as an insurance agent behind him at age 39. Gabe took a gamble on an American green card and slaved for five years at an ice cream factory in Texas to pay his way through flight school.

After graduating, he landed a dream job in Alaska as a pilot. Gabe had been in Alaska ten years by the time he passed away at 54.

I don’t know if Gabe was content in his new life. But from our brief interactions, I can say that true moments of happiness and excitement were had. He chased and lived his dream, ultimately finding joy. How many of us can say the same?

Wherever you are, Gabe, thank you.

You will be missed amidst the clouds, we’ll think of you whenever glories grace the skies.