“No man can be good unless he is brave;

and any man who is brave is good in that, if no other way.

If he is brave enough, there must always be some good in him.”

Driving through Canada, I didn’t feel brave. I felt insane. Conquering miles beneath my tires became compulsion. Fuel stops were burdensome, eating was taxing, and sleeping …ha!…more or less out of the question.

Before setting out, I gave no thought to enjoying the drive. In hindsight, it would have been nice. But I was eager.

Choosing a new home was easy. Anchorage seemed the obvious and best place to settle. As Alaska’s biggest population center, it had everything an ex-city kid could want, with ample job opportunities while still being within spitting distance to plenty of hiking opportunities. Additionally, an incredible friend from school had graciously offered to let me stay with her family while I sought employment. So it was a no-brainer.

Yet, knowing that a safe haven existed beyond the road did my frantic brain no favors. The distance arose in front of my vehicle like an ominous challenge.

The space had to be vanquished. I could rest later. 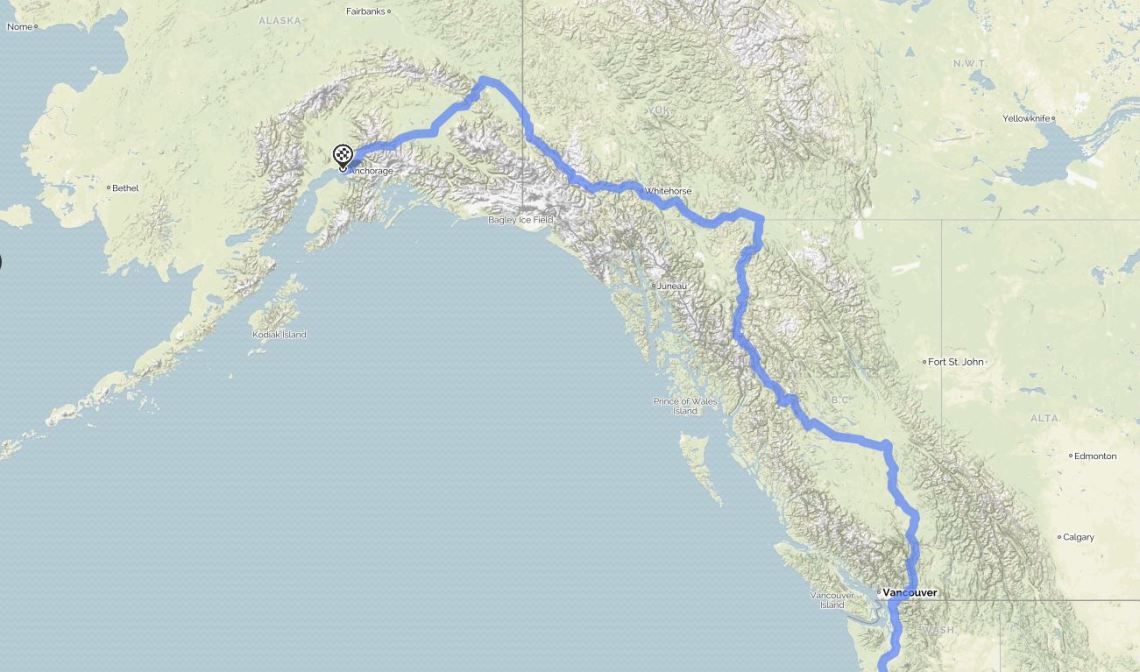 That trip almost killed me. Two saving graces stand out in my mind: a good meal and more wildlife than I’d ever beheld.

First, I stumbled across an oasis of hospitality in British Columbia. About halfway through the trip, I’d come perilously close to true exhaustion. Running low on sleep, sustenance, and fuel, I pulled over at a restaurant on the southern edge of a town called Dease Lake (population: 303).

My first steps out of the car felt uncertain and shaky. Bone weary and ravenous, I shuffled  toward the front entryway…only to see that they had closed a few minutes prior. Dismay filled me as I opened the door anyways…and found an empty restaurant.

Instantaneously, a middle-aged woman burst out of the back. Her arms immediately spread wide as she bellowed a greeting, “Welcome to Mama Z’s! You must be hungry.” I could only nod (and nearly cried) as she led me to a table close to the kitchen. After sitting down, she introduced herself as Mama Z and apologized that their cook had left for the day. My heart almost sank again before she offered to warm me up some lasagna. It was heavenly.

But the best part of my meal was the company. While I never would have admitted it, being on the road by myself for a day and a half had been a lonely sort of existence. Mama Z seemed to sense this and we spent most of the meal chatting.

Actually, I ate while she talked and filled the big empty dining room with her laughter and boisterous voice.  At the end of the badly needed supper, she flat out refused payment since it was after-hours and I was traveling. It was extremely touching and I am grateful to this day.

I passed out in my car shortly thereafter, with a full belly and that unique contentment borne of sipping from the cup of human kindness.

The next morning, it was as though life began anew. Well-rested and eager to continue my quest, I tore out of Dease Lake with an excited resolve…and almost plowed into a momma bear after only a few miles of driving.

Braking and swerving abruptly, my car came to rest in a ditch on the side of the road, and about five feet away from a fierce-looking brown bear. But when I looked into its face, all I could see was a vague resemblance to my family’s German Shepard. It was a face filled with amusement and guile. It seemed to say, “Ha! Look what I made you do!”

I laughed, thanked my lucky stars, and calmed down as the bear sauntered off. As she did so, I saw what had led her to the road in the first place. On the far side of the highway, two little furry shapes were playing in the brush.

Tempted though I was to get out and investigate, this city boy wasn’t quite that stupid.

As I drove onward, animals of every sort appeared…sometimes by the side of the road, but more often, smack dab in the middle of it! Caution was exercised, despite the hindrance to my momentum. Looking back, I am grateful for that springtime influx of animals in my path. It slowed me down, made room for reflection, and inspired thoughtful appreciation for the world I was leaving. The world of mankind.

More bears, eagles, caribou, moose, and porcupines all graced my journey. It was amazing and somehow reassuring. Their appearances gave my voyage an ethereal sort of legitimacy. As if nature itself encouraged my quest.

The final day and a half of the drive are now one big blur. I recall the final Canadian segment of the highway being torn asunder. Potholes like craters and cracks the size of small ravines were commonplace. One kindly gas station attendant told me that it was like that every spring. I learned that day how winter’s icy grasp is murderous to ill-maintained pavement.

The border crossing back into United States territory was nerve-wrecking. The customs agent was probably bored and spent almost a half hour questioning me and searching my vehicle. It was one of the more agitating parts of the experience.

He eventually let me through, and I noticed an immediate shift in the roadside sights. There was debris all along the sides of the highway – mostly overflow from people’s houses and lawns, which sprawled haphazardly from little side streets and dirt tracks. Car parts, farming equipment, trailers, and rusted snowmobiles (which Alaskans fervently call “snow machines” or just “sleds”) were everywhere.

Hilariously, almost every sign I passed was blasted with dents and bullet holes. Apparently, Alaskans are fond of using signposts for target practice. No kidding. 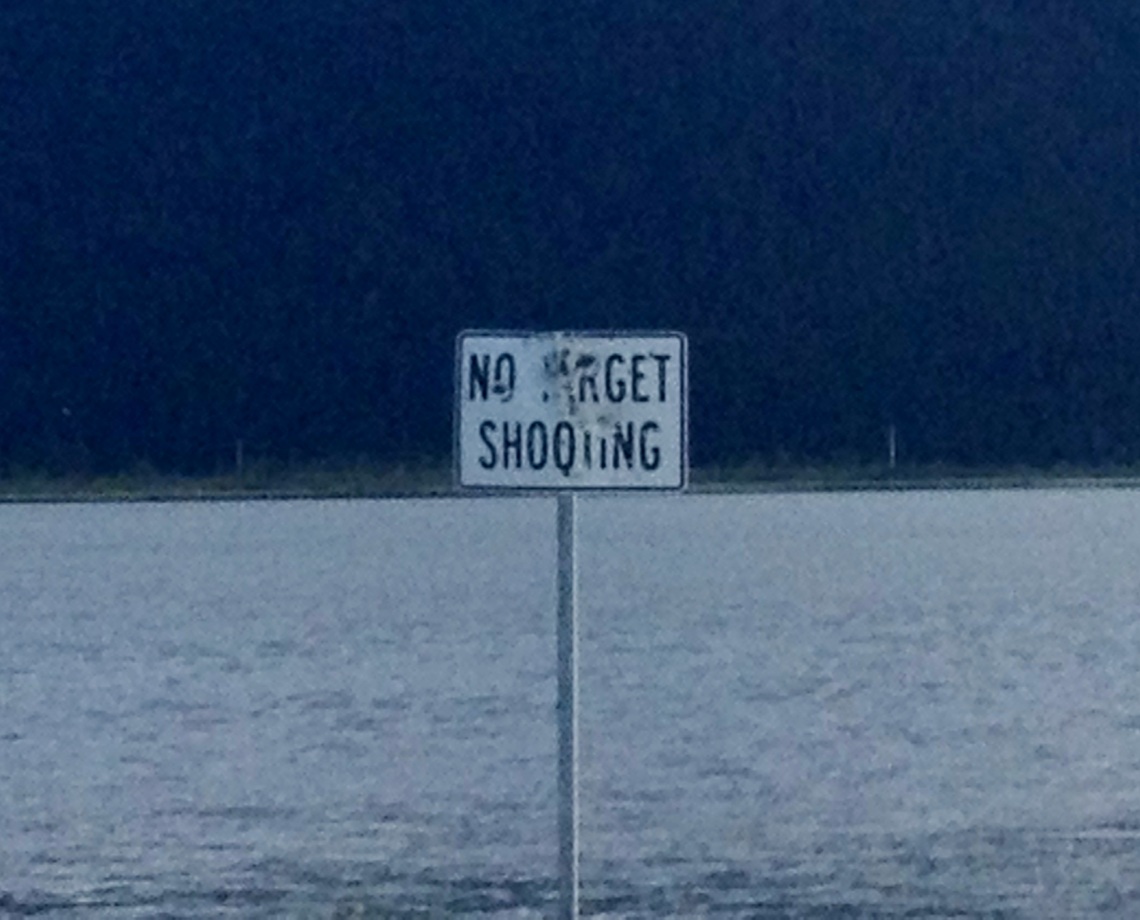 The final hours of the trek were spent in a sort of trance. I knew I was wasted. My back ached, my belly moaned, and my speed climbed perilously as the end drew nigh.

I started coming back to myself as evidence of civilization grew. The highway expanded to two lanes, then three. A sign advertised chain restaurants. Traffic, something I typically despise, became an obstacle from which I took comfort. It was familiar. Soothing.

When I finally entered Anchorage, the first stretch leading to downtown was like a rolling tableau from a gritty 80s film: car dealerships, a strip club, diners, and a pawn shop felt like a poor reward for my struggles of the past few days. It wasn’t until I found my friend’s house on the southwest side of town that I could truly appreciate the beauty of the place.

Anchorage is nestled in a bowl, with mountains cradling it on one side, and the Cook Inlet leading out to the Pacific Ocean on the other. That night, after an incredible meal of king salmon prepared by my friend’s mom, I slept like the dead for over 20 hours.

And I was home. 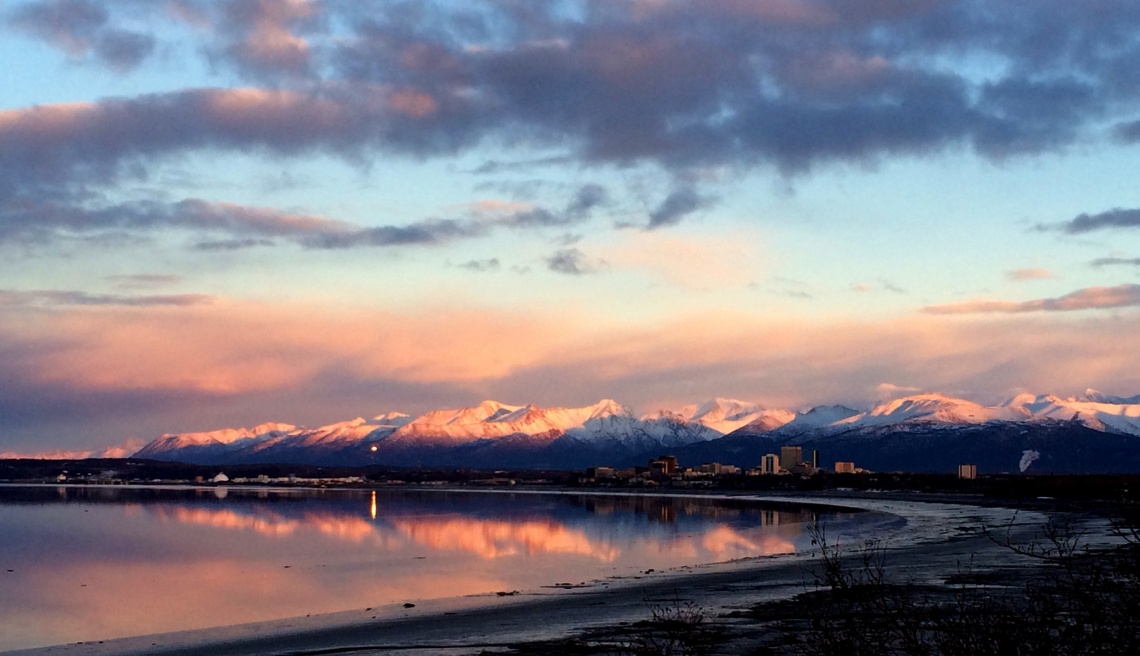